Can't afford a mortgage? Soon, you might not be able to afford rent 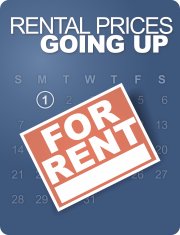 With Ottawa tightening the rules on home loans for all Canadians, landlords around the country have seized on the opportunity to raise rents. With many first-time home buyers squeezed out of the market due to higher monthly costs and tighter income requirements, landlords see an opportunity to cash in.

Canadian Real Estate Magazine reported on a new online poll of landlords, many of whom appear to be taking the Ebenezer Scrooge approach to apartment pricing following the mortgage decision. Nearly 60 percent of respondents said they will use the new rules – and the expected rise in the number of apartment seekers in Canada – as an excuse to hike rent.

“Since rental properties require 20 percent down, therefore not a [Canadian Mortgage and Housing Corporation] insured mortgage, the rule will have no effect on most investors in terms of obtaining financing,” wrote one survey respondent. “The upside is that less people can afford homes therefore more renters. The downside is that it may reduce prices if the demand softens.”

This survey respondent has hit on something other economists have been saying for the last week or so since the new rules came out. Yes, it's going to be harder for some homebuyers to enter the housing market for a while. But there will likely be a price correction in the not-too-distant future that could even the playing field again.

"The new rules, which limit the availability of insured mortgages to amortizations of 25 years or fewer and to homes worth less than a million dollars, will curb demand and thus dampen prices," according to Sal Guatieri, senior economist with BMO Capital Markets. "By our estimate, to neutralize the impact on mortgage payments of the amortization rule change, average home prices would need to fall about 3 per cent. By helping to cool the market now, the rule changes should increase the odds of a soft – rather than hard – landing."

Unfortunately for Canadians who are eager to take advantage of current low mortgage rates while they last, this price correction may not come soon enough. Recent numbers from the Canadian Real Estate Association indicated that home prices rose in May by about 5.8 percent – slower growth than April, but strong nonetheless. So it looks like some Canadians who can't afford to pay a higher price on a mortgage may be stuck paying a higher price on rent for a little while. Do you know anyone who is being affected by rising rent?

Next
Mortgage rules discussion goes on - and on and on...
Previous
Homebuyers bummed by economy not shying away from home purchases
Compare. Calculate. Apply today.