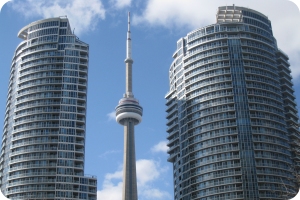 There’s been a lot of speculation regarding Canada’s cooling housing market. From calling the cool-down a necessary change to decrying it a doomsday scenario, industry analysts have made sure it dominates the news.

Meanwhile, amidst all the noise, the state of Canada’s condominium boom has received very little comparable attention. Now the biggest housing news is coming straight out of Canada’s condo epicenter: Toronto.

According to The Globe and Mail, resale condo prices have failed to significantly appreciate for the first time in three years.

Being Canada’s most populous city, it’s no surprise that Toronto has become the center for condo construction. But as the housing market began to cool, Toronto bucked national trends and continued building full steam ahead.

This resulted in an overabundance of units, skyscrapers full of open, empty space, waiting on a consumer demand that no longer existed.

Data from market research firm Urbanation showed that there were 18,123 unsold condos in the Toronto area as of June 2012, along with 224 condo building projects currently underway, according to RealNet Canada. Pouring salt on the wound was the Toronto Real Estate Board, which confirmed that condo sales were down 29 percent from the same time the previous year.

This has led to a depreciation in pre-construction condo prices, but this quarter marks the first time since 2009 that resale condo prices have remained stagnant. In fact,The Globe and Mail reports that the average price for a condo sold between October 1 and October 14 was $356,312, a 4 percent decrease from the same time last year.

This comes in the wake of data showing that home sales in Canada fell by 15.1 percent in September, with Vancouver leading the nation, according to BMO Financial Group’s Robert Kavcic.

While falling home sales and a depression in condo prices is far from great news for the Canadian housing market, the current trend offers a unique opportunity for consumers. The continuation of low rates for home loans, in addition to the current surplus of condos, is shifting the market in favor of buyers, a trend that appears to finally be affecting resale condos.