What is the target overnight rate?

The target overnight rate is a key Bank of Canada-controlled interest rate used as a basis for one-day (or "overnight") borrowing between the major lenders and financial institutions. This rate plays a pivotal role in influencing the economy. 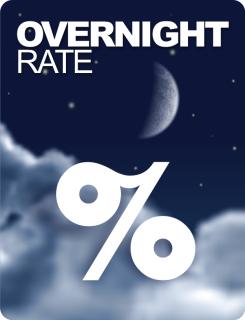 The target overnight rate is the primary monetary policy instrument available to the Bank of Canada. By changing the overnight rate, the Bank of Canada can assert short-term control on the demand and availability of credit products across the board. This control causes a delayed, but direct, effect on the level of inflation of the Canadian dollar.

When the overnight rate is decreased, the cost of credit decreases, mortgage rates fall, and consumer demand for credit products rises. In situations where the overnight rate has fallen, it also becomes easier for banks and lending institutions to provide credit for consumers because it's less expensive for them to lend amongst themselves.

The opposite is also true, that in increasing the overnight rate, the cost of credit increases, and, temporarily, demand sinks.

The Bank of Canada's monetary policy and focus on inflation

The short- and long-term effects of target overnight rate changes

Our Mortgage Loan Calculator
You will have quite a few decisions to make about your home purchase, but you can simplify the process by using our mortgage calculator. Try different rates, terms, and amortizations and see what modifying your mortgage payment schedule from monthly to biweekly or weekly payments will do to affect what your mortgage will finally cost you.

Get Pre-approved for a Mortgage
Have you been pre-approved for a home mortgage yet? Getting yourself pre-approved will help you shop for a home by letting you know exactly how much you can afford. A Pre-approval also locks you in at our best mortgage rates for 120 days, so that when you've finally found your home, you won't miss out on Canada's historically low rates, and if our mortgage rates change within that 120 day period, we will honour the lowest rate.