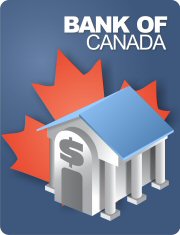 What a large number of analysts have been predicting for months has proven true; the Bank of Canada has opted to keep its benchmark, overnight interest rate at 1 per cent.

The rate announcement came with a message: at present, combating inflation needs take a back seat to spurring economic growth amid the debt crises being faced in European and U.S. markets.

“The U.S. economy has grown at a slower pace than expected and continues to be restrained by the consolidation of household balance sheets and slow growth in employment,” a press release issued by the BoC stated.

“While growth in core Europe has been stronger than expected, necessary fiscal austerity measures in a number of countries will restrain growth over the projection horizon.”

As Italy remains in danger of a Greece-like economic tumble, this morning saw the Canadian dollar gain more than a cent in trading. At the time of writing, the loonie weighed in at 1.05252US, up from 1.04232US at yesterday’s close.

Despite all of this seemingly good news, inflation did rise above the BoC’s target one-to-three per cent range over the last months, and while no changes were announced today, many are certain they are on the horizon.

“To the extent that the expansion continues and the current material excess supply in the economy is gradually absorbed, some of the considerable monetary policy stimulus currently in place will be withdrawn,” the Bank said.

The BoC predicts that by 2012 the economy will hit full capacity.

Next
What is TFSA: Why Canadians should be Investing Tax-Free
Previous
Stampede Buzz of Activity Could Mark Economic Recovery
Compare. Calculate. Apply today.