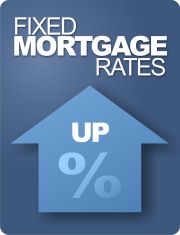 Attributed to a rise in bond yields, big Canadian banks TD Canada Trust and RBC have decided to increase mortgage rates on their five-year fixed rate mortgages by as much as 25 basis points, or one quarter of a per cent.

The decision is marked by higher bond yields, meaning it is more expensive for banks to borrow in the bond market, a cost that is offset by raising mortgage rates available to consumers.

TD Canada Trust says it is typical for mortgage rates to rise when bond yields rise. However the bank has decided to leave its six, seven and ten year closed rates, as well its one-year open and six-month convertible rates, unchanged.

The two banks will also be adjusting their three and four-year rates, up a quarter of a point, while one and two year rates will see marginal increases of 0.15 per cent.

RBC decided to leave its seven and ten closed rates, as well as its six-month convertible mortgage rate, as is for now.

The five-year fixed-rate mortgage term is the most popular among Canadian buyers. This rise in bank rates may influence some Canadians to look to other lenders, or to consider the ever-increasingly popular hybrid mortgage product.