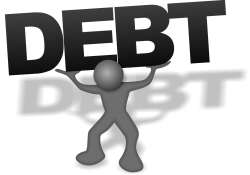 The average debt-to-income ratio for Canadians has hit a record high: 145 per cent, according to a report from the Vanier Institute. Home purchase is, arguably, the greatest influence on this number. Historically the cost of a home has equated three times the average Canadian worker’s income after tax. Now that value is about five times the average income earner’s after-tax salary.

Canadians are visibly making efforts not to default on their mortgages. However, they are still accumulating debt in a manner that outpaces their earnings.