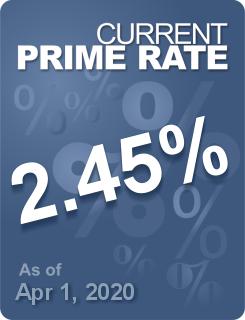 Put simply, prime rate is basically a guideline rate, used by banks and lenders to determine the best rate at which they are comfortable lending to their top clients taking current conditions into consideration. In this country, that rate is determined and announced eight times per fiscal year by the Bank of Canada.

Prime rate changes according to the current tides of the economy. When the cost of living rises and market activity cools, prime rate generally falls, making financing more affordable to attain, and generally stimulating spending. When low rates encourage too much activity, prompting inflated costs and price values, prime rate is generally adjusted higher, discouraging buyers and allowing the market time to cool and readjust.

During the early 1980s Canada’s prime rate saw its largest spike and drop in history. From 1978 to 1981 prime rate rocketed from 8 per cent to its record highest reported: 22.75 per cent. From 1987 to 1993 rates spiked and fell again, falling to the 4 to 6 per cent range where they more or less stabilized for several years, until the most recent recession saw prime rate slide in 2008 to 2009’s historic reported low of 2.25 per cent, back up to 3 per cent where it is still hovering about today.

This recession affected countries worldwide; how did their economies adjust prime rate to compensate? Here are the prime rate averages for the top economies on the globe, the first number being the 52-week high and the second the 52-week low:

In comparison to its world neighbours, it could be said that the Bank of Canada has taken a slightly more moderate approach during the slowed economic tides, or that the Canadian market has not needed the extreme drop in rates that other countries have needed to spur recovery. After roughly three years of time, an election and reports that markets – including commercial starts and recreation property interest – are improving, the Bank of Canada has decided that to raise rates further would still be risky amid an economic environment still so uncertain. The next prime rate announcement will be made Tuesday, July, 19, 2011.

In the United States, where property values crashed and arrears peaked, the Federal Reserve holds rates steady at 3.25 per cent, while Britain holds prime rate at an almost unimaginable 0.50 per cent.

The Euro Zone, however, announced their prime rate rise to the current 1.25 per cent, still unusually low, just last Thursday. The statement they are making? The European Central Bank (ECB) is taking a stand against rising inflation. The problem lies in a building debt crisis; something Canadians are growing familiar with.

Meanwhile Switzerland is currently stationed at its near lowest rate of 0.52 per cent, Australia has crept up to its current 4.75 per cent, and Japan has seen a slow rate decrease since April.