Is the security afforded by a long-term mortgage worth the added cost? 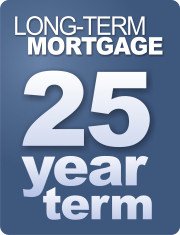 Earlier this year the Government of Canada made it easier for Canadians to qualify for a mortgage if they locked into a fixed-rate, five-year mortgage term. The five-year, locked-in, fixed-rate mortgage is, most commonly, the mortgage of choice among Canadians. Regardless of rising inflation or other economic influences, the locked-in five-year term means your monthly payments will not fluctuate for a decent chunk of time.

As current interest rates are at historical lows, it is possible that inflation may spike in an effort to recover from these low borrowing rates. Being locked into a rate that stays static while rates rise unpredictably may seem like it could be beneficial. However, some say a longer-term mortgage only saves the homeowner if interest rates rise in excess of 3.5 per cent of current rates, and that the chances of that happening in Canada over the next decade are virtually impossible.

According to Canadian Mortgage Trends, acquiring a 10-year mortgage today will cost you around $6,900 more for the first five years, with a 25-year amortization, on every $100,000 of your mortgage. Some banks even offer 25-year fixed-rate mortgage terms, at a current interest rate of about 8.25 per cent, nearly three percentage points higher than the average current five-year fixed rate.

Variable rates, meanwhile, dip as low as 2.3 per cent in today’s market, and variable mortgage terms often allow the mortgagee to lock into a fixed rate at some point within a term. So if the prime rate spikes, one may still be able to cut their losses. However, if your budget is tight, your income isn’t rising, or you are simply not a budgeting guru, a locked-in mortgage rate may still be the more attractive route for you.

Most statistical information, and mortgage specialists’ opinion, indicates that choosing a Variable Rate Mortgage will save you money over the long haul , but a variable rate cannot guarantee the assurance and consistency a locked-in term can. Knowing your monthly payments makes it easier to budget, and protects you in those years when inflation spikes exponentially.

A hybrid option incorporates the best of both worlds. Within a hybrid mortgage you may assign a percentage of the mortgage to be locked-in at a fixed rate, and a percentage that will be subject to a variable interest rate.

If you decide that the security of long-term, consistent payments outweighs the odds of their higher cost over time, be sure that the product you choose affords some flexibility in case you change your mind or decide to move. If halfway into your 10-year mortgage term you decide it better befits your circumstances to refinance into a lower rate with a shorter term product, know the penalties for that decision, and the terms under which you can act.

Next
Are Mutual Funds Underperforming?
Previous
Debate on the ‘No Money Down’ Mortgage
Compare. Calculate. Apply today.