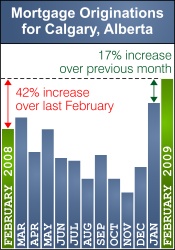 Predictions that this year would see a slow uptake of Canadians taking on new mortgages have been proven erroneous. Canada’s mortgage targets for 2009 were surpassed by 15 per cent in February, with Calgary’s mortgage market seeing even greater climbs.

This past February CanEquity Mortgage saw a 42 per cent gain in mortgage originations over February, 2008, and a 17 per cent hike from January. While November, 2008 was the slowest month for mortgages in Calgary, the municipality has seen a steady and significant ascent in mortgage purveyance every month since then. If this trend proves continuance, 2009 will be a much brighter year for the real estate market than the annum previous.